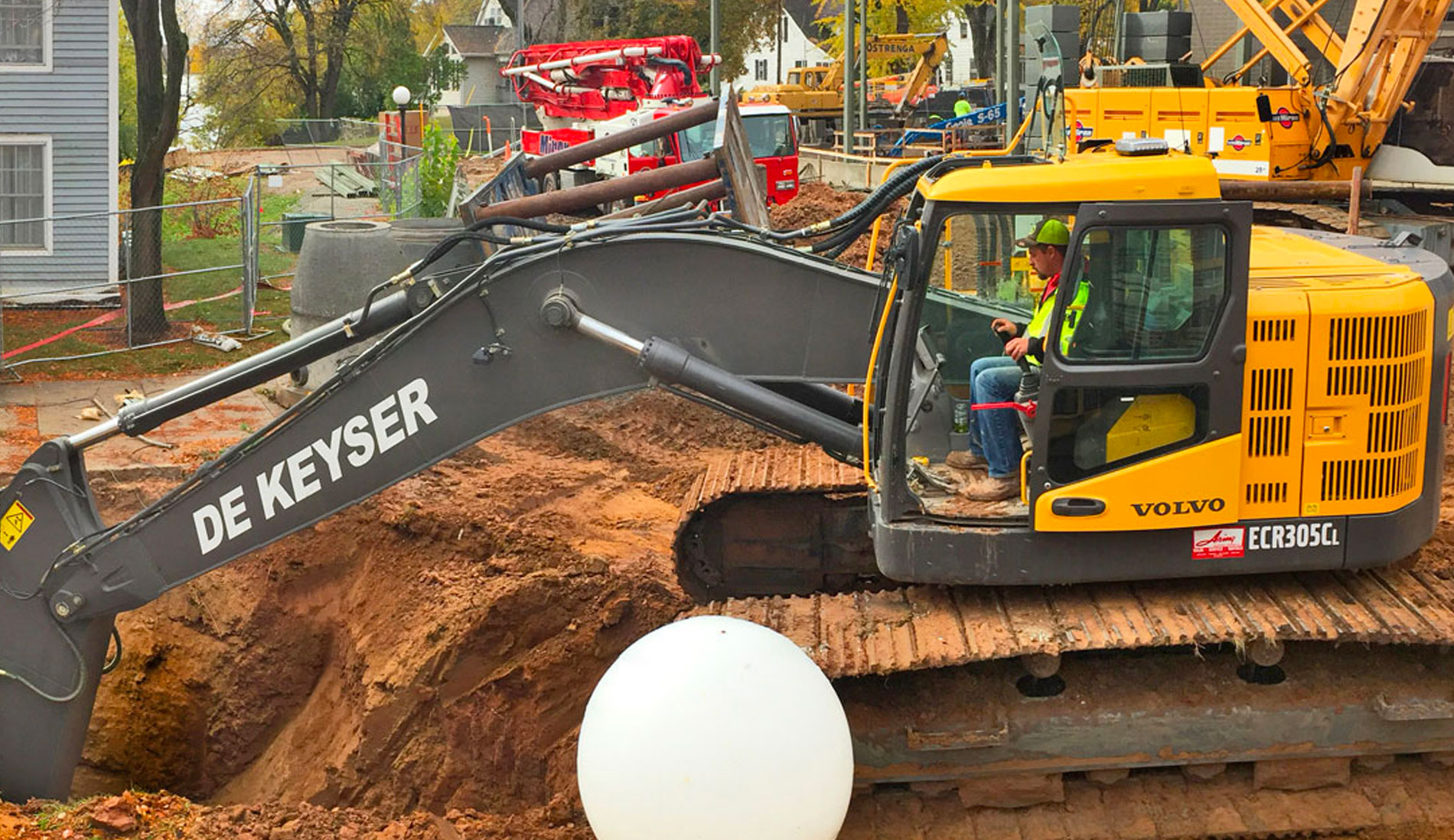 DeKeyser Construction signatory to Local 139 since 1969

“The DeKeyser Construction Co. uses a laser beam to install sewer pipe so that it is straight and true to the design elevations and alignments.

“The laser beam is installed at the start of a job and the workmen merely follow the beam to assure setting the pipe at the proper depths and in the right direction.”

The flare-up of Dan DeKeyser’s autoimmune illness left him exhausted, as it had too many times before during his lifetime. Lacking the energy he needed to lead his family’s sewer and water construction company, DeKeyser opted to seemingly take a step backward. He sold off much of his equipment, rewrote his business plan, and downsized the company of which he had been an integral part for almost 40 years.

His timing was perfect.

Just prior to the start of the Great Recession in 2008, DeKeyser Construction thus was positioned to not only survive in a downward-trending economy, but to evolve and to grow. “It was just by luck that we did those things back then, because of my illness,” said the 68-year-old, unassuming president of the company. “Actually, the recession didn’t affect us. We kept busy.”

A few years earlier, DeKeyser and his son, Kurt, made another critical decision that likewise played out well for them. After concentrating on municipal sewer and water projects since its founding in 1965, the family would dig a different trench, so to speak. They would limit their involvement in the public sector mainly to emergency repairs of broken sewer and water pipes. Bids would be submitted on some public projects, such as those coming from school districts, and they would provide incidental services.

As for installation, they would focus on industrial and commercials settings. “The market margins in municipal work had gotten terrible,” Dan DeKeyser, a retired 139er, said.

Changing the focus of the business has kept Operating Engineers busy working for DeKeyser Construction in large measure because emergency repairs remain in demand year-round, regardless of recession or boom times. “If the economy goes down, we’re still good,” said Kurt DeKeyser, 40, vice president of the company, and a Local 139 member since 2000.

“We have a lot of regular customers who keep adding and adding to what they need. And we have enough excavators, for example, that we can have guys working at one location, get machines staged at another job, and keep rotating them around.”

Typically, DeKeyser’s men and machines are dispatched within a 50-mile radius of the company’s year-old headquarters in the town of Humboldt, adjacent to the east side of Green Bay.

They relocated to the 12,000-square-foot office and shop building in March, 2016 from what had been the site of the family farm, about four miles away, off University Avenue in Green Bay. The new building is on a 20-acre parcel with fenced-in equipment storage yard.

DeKeyser Construction usually employs three Operators and is transitioning to a crew of different 139ers following a series of retirements. “We never lack for people wanting to come here,” Dan DeKeyser said. “And that’s because there is a team atmosphere, employees help and look out for each other; it creates a safe and productive environment.

“Our people are in the public eye a lot and we want everyone to act as professionals. We get a lot of comments from our customers about how our employees are courteous and professional.”

Ron DeKeyser, Dan’s late, older brother, and their cousin, Jim DeKeyser, founded the business in 1965. The cousins had worked for another sewer/water contractor in the Green Bay area for five years and decided to set out on their own. In 1969, Dan joined the business as an Operator. That year the family also incorporated the business and became signatory to Local 139.

Prior to joining the Operators, Dan DeKeyser studied civil engineering. He also served in the Marines, as a reservist, for six years.

“You jump into the fire and hopefully you survive,” Dan DeKeyser said.

DeKeyser Construction is signed to Local 139’s Area II Building Agreement. Its excavators, trucks, tractor-loader backhoes and other machines have had a regular presence at the Green Bay area’s most recognizable landmark, Lambeau Field, since a series of renovations and upgrades began there in 2000. However, the contractor is not involved in work currently under way at the home of the Green Bay Packers.