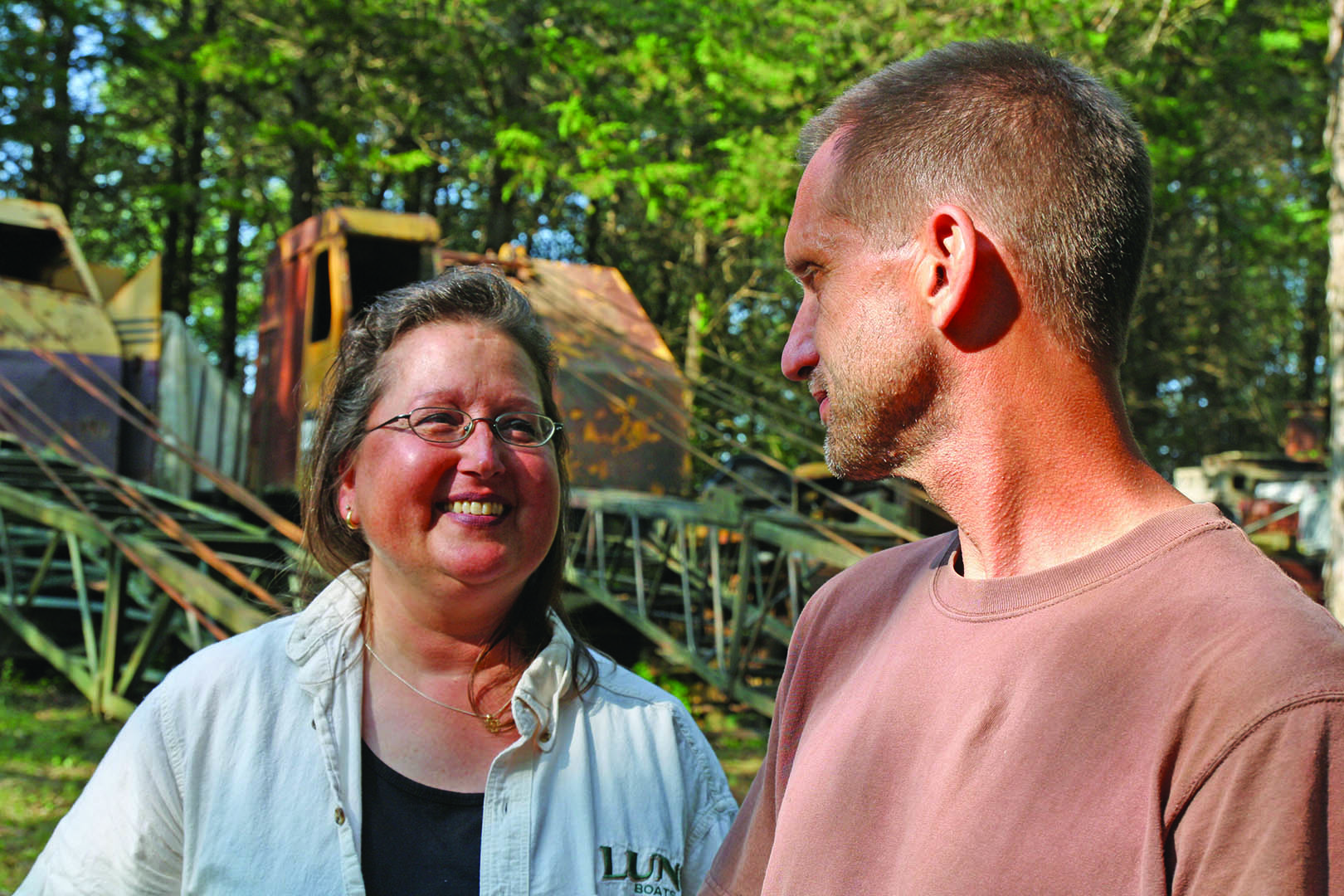 POYNETTE – His collector’s eye zeroed in on the half-yard, antique cable pull hoe passing by the job site in Dubuque, Iowa, bound for some scrap yard and oblivion.

Craig Glover knew he had to have the piece. It would complement ideally the 1953 Link-Belt LS-51 Speeder parked back home. He also knew he had to act quickly.

“Right away, I had Brenda call every scrap yard in a 25-mile radius of where I was running tower crane. She found it and I called the yard and told them I’d be there the next day,” Glover said, trying to explain the passion he shares with his partner, Brenda Hacker, for old cranes.

They trucked the cable pull hoe back to Wisconsin. It joined an expanding collection of cranes and other pieces of old iron that raises their spirits and greets visitors at the entrance to their home.

“It is a mutual passion for both of us, finding the machines, doing the research on them, and bringing them home,” said Craig, a District B rank-and-file member of the Local 139 Executive Board, who joined the Operating Engineers in 1994. “We’ve been together for 15 years and knew each other for three or four before that.

“This hobby started in 2008. She wanted a Northwest (crane) because she started out as an oiler on a Northwest 1200c, one of only four ever built, working for Edward Kraemer & Sons. Our Northwest 25 is the first crane we bought.

“I have a friend with a truck and a trailer that we could haul the cranes home on. But now we use trucking companies. The machines are priced to justify the expense of trailering them.”

Brenda, a Local 139 member since 1993, continued their story: “I got cranes in my head and that’s where they stayed. They’re all unique. They all have a different story. In their day, they were modern, top-of-the-line machines.

“I’m just fascinated by the engineering and mechanics, the open gears and the cables and the big chains, the evolution from this one, to that one, to the next one. Every manufacturer applied how they thought they could do it better than everyone else … They’re all my babies.”

Brenda was profiled in the 100-year history of Local 139, published in 2002. That article chronicles how she was introduced to construction equipment at a young age, through her family’s small excavating business in Washington County. Her affection for cranes began while studying to become a teacher at University of Wisconsin-Milwaukee. “I watched a building being built near the school and I was fascinated by the crawler cranes, the engineering of the cranes,  by their fluidity.

“I recognized that my profile didn’t match what they (Milwaukee Public Schools) wanted and I was OK with that. So I went to the (Local 139) hall in Pewaukee and signed up.”

As an employee of Edward Kraemer & Sons Inc., Brenda learned to run a variety of machines including  track loader, tugboat and friction crane. In 1997, she took a job with J.H. Findorff & Son Inc. There she found her dream job. She had an opportunity to operate friction and hydraulic crawlers, rough-terrain cranes, and tower cranes.

Craig was operating rented truck cranes when the pair started running into each other on job sites. He, too, enjoyed more than a practical interest in the machines he ran for a living, as well as in learning the history of construction equipment. Their relationship evolved.

The couple finds antique machines through a variety of sources: word of mouth; the online Craig’s List inventory; the Historical Construction Equipment Association; and the website, HeavyEquipmentForums.com.  “Being a hobby, you have to gauge how much you want to put into it,” Brenda said. “You could go broke on one machine.”

Sometimes the pair loses out on purchases to others, scrap buyers who have no interest in purchasing yesterday’s iron as a hobby. “We found a Lima 34 (dragline) that was immaculate,” Brenda said. “It looked like it just left the factory. The engine started right off and it sounded great. But the scrappers got there before us.  We couldn’t compete with the prices they were paying … We couldn’t save it.”

Craig is employed by Findorff.  Brenda no longer can work. A cancerous tumor is growing inside her brain. It is pressing on the nerves in her spine. She has lost much of the use of her left arm and leg.

Despite this condition, Brenda laughs often. Her disposition is upbeat.

Putting time into researching used construction machines and locating parts, operating manuals, and sales brochures, has helped her learn how to educate herself about her disease.

“I do a lot of researching,” she said. “I’ve always  tried to learn stuff, to advance yourself every day.

That’s how I was brought up. The researching has switched to more about cancer and less about cranes, but I still look for crane information every day.”

Last Valentine’ s Day, Craig secured a LED light rope to the top of the boom of the 25-ton Manitowoc 2000 crane the couple shares. The rope, configured in the shape and color of a heart, is powered by a yellow extension cord strung through the lattice boom, reaching 80 feet skyward.

The Operator connected the display to a timer so the heart set in the tree tops burns red every night. 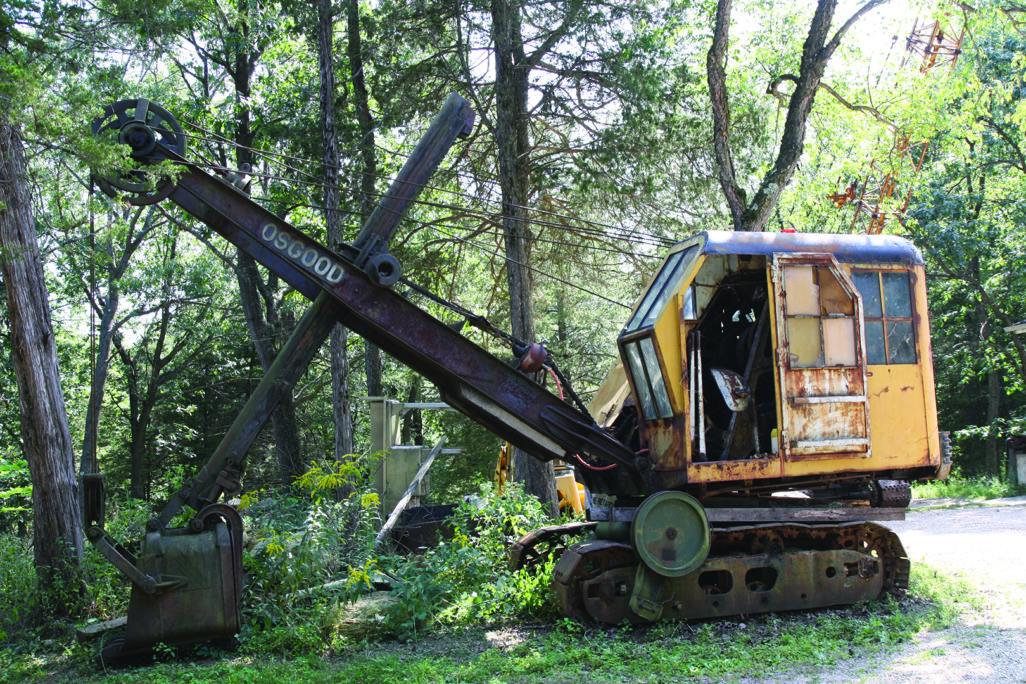 Operators Brenda Hacker and Craig Glover constantly keep an eye out for old construction machines they can bring home such as this 1945-model Osgood 200 front shovel. 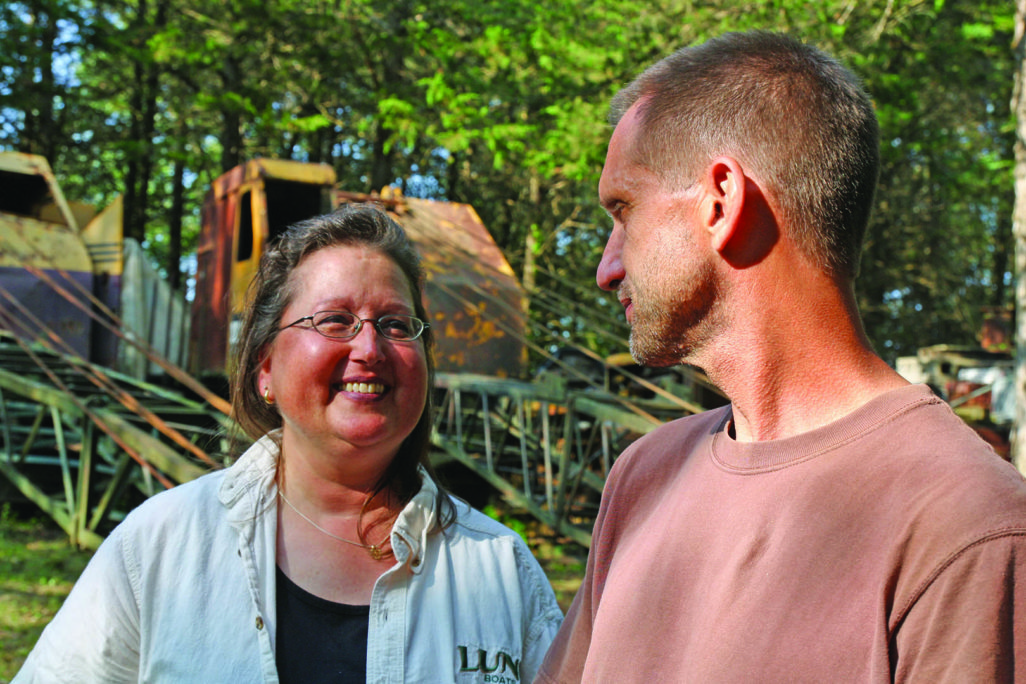 Operators Brenda Hacker and Craig Glover constantly keep an eye out for old construction machines they can bring home.

On Valentine’s Day this year, Craig placed a LED light rope atop the boom of the 25-ton Manitowoc 2000 crane that he and Brenda purchased. The heart-shaped red lights are powered by a yellow extension cord strung through the lattice boom, reaching 80 feet up into the sky. The light display is connected to a timer and shines nightly.