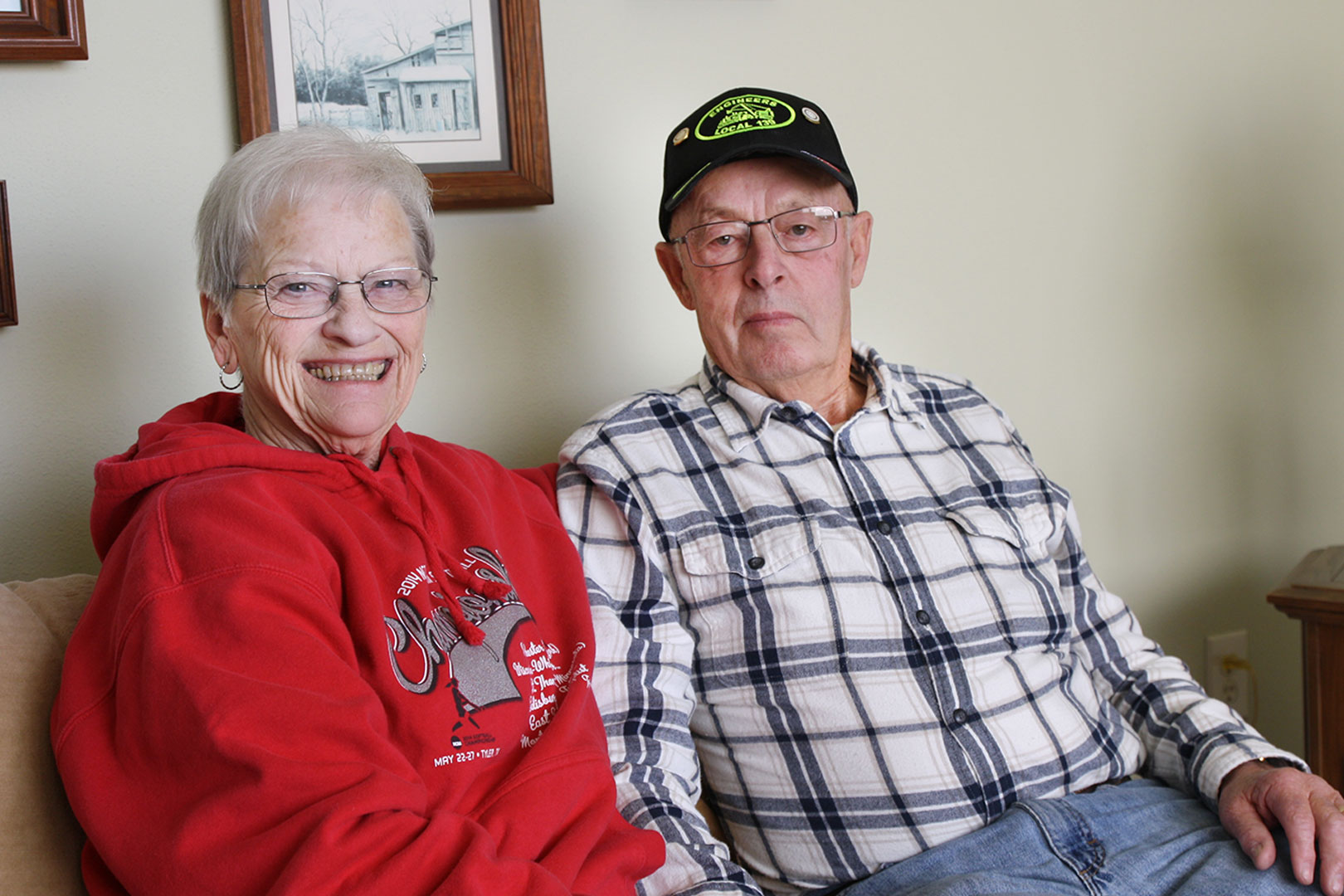 PLAIN, Wis. – At age 80, retired Operating Engineer Ken Volk eagerly awaits a phone call to return to his craft whenever the opportunity arises.

The 60-year member of Local 139 treasures every chance he can get to run a loader, or another piece of equipment, yet one more time.

A phone call from his longtime employer, The Kraemer Company, can come at 9 o’clock at night for a work assignment the next morning. Sometimes the phone rings at 9 a.m. in the morning, after someone didn’t make it to their job site that day.

The day before an interview for this story, Volk ran a loader at a pit in Helena, which is near Spring Green, and about 10 miles from his home.

But the calls from the Kraemer shop grow fewer and farther apart as the construction season winds down and the contractor strives to find work for its full-time, active Operators. So at this time of year, Volk finds extra joy when his skills are requested.

“One of my doctors told me, ‘I see that you work part time,” Volk said. “The doctor said, ‘Keep doing it if you can. That’s the best medicine.’”

As he did for more than three decades as an active member of the union, Volk keeps 5 gallons of hydraulic fluid in his Ford pickup along with a grease gun and 5 gallons of engine oil. He’s not about to be unprepared for grease time on any machine he’s called on to run.

The Operator’s enthusiasm for work, combined with his slender figure, his quick step, and his ever-present humor, belie the fact that Volk is a stage-four cancer patient. He’s been battling cancer since 2009, when he had a kidney removed. He also had a cancerous spot on his liver eliminated in 2012, has survived a heart attack, and had his gall bladder taken out.

Last year, after 4.5 years of remission, a CAT scan revealed that cancer had returned to his liver.

Volk and Joanne, his wife of 55 years, decided against fighting the disease with traditional treatments, such as chemotherapy and radiation. Instead, they chose what is described as an experimental immune therapy.

Every three weeks Volk receives two injections at University Hospital in Madison. An injection in one arm takes an hour; the second takes about half that time.

“If he wasn’t working all these years I don’t think he would be here,” said his son, Kevin Volk, a third-generation Operating Engineer. “He’ll get a little bent over, over the winter, when there’s not much work for him. But in the spring, after a couple of days on the equipment, he’ll be all straightened out again.”

Ken Volk joined Local 139 in 1957 and plans to receive his 60-year service pin at the union’s Christmas party Dec. 13 in Boscobel. He was employed first by Edward Kraemer & Sons Inc. (now bridge builders Kraemer North America LLC) and then with what became its crushing division, The Kraemer Company.

He followed a path charted by his late father, Cyril Volk, who also worked as an Operator for Edward Kraemer & Sons before retiring at age 62.

Like many Operators, Ken Volk has an engrained work ethic that keeps him a valuable employee despite his age and health issues. “When I’m out there working, I don’t think about it (cancer),” Volk said. “I feel good. I feel OK as far as going out and working.”

Joe Kraemer, The Kraemer Company vice president, said, “He’s been an extremely hard worker his whole career. He’s always wanted to work since he retired. He’s always helped us out when we were in need, on short notice. We can always depend on him, as mainly a loader Operator now, to clean up the quarries and keep everything ship shape.”

Overall, Volk has worked for four generations of the Kraemer family with Joe Kraemer representing the third generation.

Prior to retiring, it wasn’t uncommon for Volk to amass 3,200 to 3,400 work-hours in a year, making aggregate in the summer while maintaining equipment in the Kraemer shop during winter.

He once worked Mondays through Saturday mornings at a Kraemer crushing plant near Superior, then headed home to be with his family in Plain on Saturday afternoons. Sunday afternoons he’d double back to Superior to report to work Monday mornings.

The fact is her husband also ran crushing plants for the Kraemers in Minnesota, Utah, Nevada, Indiana, Kentucky, and Ohio. And for a time, Joanne and the couple’s four children came along with dad when called to work opportunities out of state.

While working part time as a retired Operator benefits her husband’s physical and mental well-being, Joanne Volk said he has other pursuits as well, and that he’s not about all work and no play. The couple enjoys traveling to Iowa and Las Vegas to gamble, and to Florida and elsewhere, to watch the University of Wisconsin-Whitewater softball team that is coached by their daughter, Brenda.

Ken Volk said that continuing to work for The Kraemer Company is something like a hobby to him.

“I used to fish and hunt,” he said. “But if I don’t have anything to do around here, around the house, it’s an awfully boring day. I’ve worked all my life and I don’t have a reason to stop.”