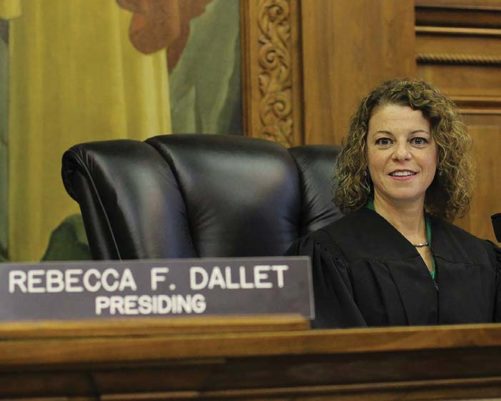 Today, April 3, is Election Day in Wisconsin and the only statewide race on the ballot is a critical contest for a 10-year term on the state Supreme Court.

A Milwaukee County judge who has served in that role for a decade, she also is a former prosecutor and law professor. She has worked at the county, state and federal levels and was a court commissioner.

“The rights of Wisconsin’s working men and women have been under attack and we need to do something about it!

A critical step forward is electing Rebecca Dallet to Wisconsin’s Supreme Court. Judge Dallet is a former prosecutor who is tough on crime and will stand up for our hard-fought rights. “Big-Business money is being poured into the race to defeat her and to defeat us! As Operating Engineers, we are nearly 10,000 of Wisconsin’s fi nest heavy equipment operators.

We are the backbone of Wisconsin. Rebecca Dallet understands the critical role we play in building a better Wisconsin and she understands we should have a voice on issues affecting our working conditions and wages. Vote like your job depends on it. Vote Rebecca Dallet for Wisconsin Supreme Court.” – Terry McGowan, President/Business Manager, I.U.O.E. Local 139